The main consideration judge takes while granting anticipatory bail in 420 is the existence of Prima-Facie case. That means if on the face of it there seems to be fraud or cheating without going to analysis of evidence if there is fraud then court can decline bail to accused. Bail in 420 then granted on stringent condition of pre deposit of money.

Its advisable to engage a competent criminal lawyer once a criminal complaint or FIR has been lodged. Once engaged, a suitable course of action including application for pre-arrest notice, notice bail or anticipatory bail can be decided upon.

Once decided, the Lawyer would draft an anticipatory bail mentioning the reasons for bail application and your version of the facts surrounding the matter. Application for bail is then made at an appropriate Sessions Court.

While granting anticipatory bail, the Court can impose one or more of the following conditions based on the facts of the particular case:

In granting regular bail in 420 the court may consider for what purpose the accused to be required in custody and gravity of offence. 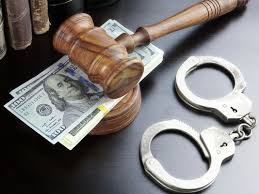 (b) Reasonable apprehensions of the witnesses being tampered with or the apprehension of there being a threat for the complainant should also weigh with the Court in the matter of grant of bail.

(c) While it is not accepted to have the entire evidence establishing the guilt of the accused beyond reasonable doubt but there ought always to be a prima facie satisfaction of the Court in support of the charge.

(d) Frivolity in prosecution should always be considered and it is only the element of genuineness that shall have to be considered in the matter of grant of bail and in the event of there being some doubt as to the genuineness of the prosecution, in the normal course of events, the accused is entitled to an order of bail.

Liberty exists in proportion to wholesome restraint, the more restraint on others to keep off from us, the more liberty we have. The law of bail, like any other branch of law, has its own philosophy, and occupies an important place in the administration of justice and the concept of bail emerges from the conflict between the police power to restrict liberty of a man who is alleged to have committed a crime, and presumption of innocence in favour of the alleged criminal. An accused is not detained in custody with the object of punishing him on the assumption of his guilt.

Reputation of a person is his valuable asset and is a facet of his right under Article 21- Grant of interim bail pending regular bail application Following the decision of this Court in the case of Kamlendra Pratap Singh Vs. State of U.P. and Others [(2009) 4 SCC 437], we reiterate that a Court hearing a regular bail application has got inherent power to grant interim bail pending final disposal of the bail application. In our opinion, this is the proper view in view of Article 21 of the Constitution of India which protects the life and liberty of every person.

Factors to be considered while granting bail:  It is well settled that the matters to be considered in an application for bail are (i) whether there is any prima facie or reasonable ground to believe that the accused had committed the offence; (ii) nature and gravity of the charge;(iii) severity of the punishment in the event of conviction; (iv) danger of accused absconding or fleeing if released on bail; (v) character, behavior, means, position and standing of the accused; (vi) likelihood of the offence being repeated; (vii) reasonable apprehension of the witnesses being tampered with; and (viii) danger, of course, of justice being thwarted by grant of bail (See Prahlad Singh Bhati v. NCT, Delhi (2001) 4 SCC 280 and Gurcharan Singh v. State (Delhi Administration) (1978) 1 SCC 118). While a vague allegation that accused may tamper with the evidence or witnesses may not be a ground to refuse bail, if the accused is of such character that his mere presence at large would intimidate the witnesses or if there is material to show that he will use his liberty to subvert justice or tamper with the evidence, then bail will be refused.

Scope of interference in the matters of bail – Art 136 The general rule that this Court will not ordinarily interfere in matters relating to bail, is subject to exceptions where there are special circumstances and when the basic requirements for grant of bail are completely ignored by the High Court.

Findings of a higher court or a coordinate bench must receive serious consideration at the hands of the court entertaining a bail application at a later stage when the same had been rejected earlier The principles of res judicata and such analogous principles although are not applicable in a criminal proceeding, but the courts are bound by the doctrine of judicial discipline having regard to the hierarchical system prevailing in our country.In such an event, the courts must give due weight to the grounds which weighed with the former or higher court in rejecting the bail application. Ordinarily, the issues which had been canvassed earlier would not be permitted to be reagitated on the same grounds, as the same it would lead to a speculation and uncertainty in the administration of justice and may lead to forum hunting.

Therefore, we are not in agreement with the argument of learned counsel for the accused that in view the guaranty conferred on a person under Article 21 of the Constitution of India, it is open to the aggrieved person to make successive bail applications even on a ground already rejected by courts earlier including the Apex Court of the country.

Prolonged delay in disposal of the trials and thereafter appeals in criminal cases, for no fault of the accused, confers a right upon him to apply for bail

To have speedy justice is a fundamental right which flows from Article 21 of the Constitution. Prolonged delay in disposal of the trials and thereafter appeals in criminal cases, for no fault of the accused, confers a right upon him to apply for bail. This Court, has time and again, reminded the executive of their obligation to appoint requisite number of judges to cope with the ever increasing pressure on the existing judicial apparatus. Appeal being a statutory right, the trial court’s verdict does not attain finality during pendency of the appeal and for that purpose his trial is deemed to be continuing despite conviction.

We feel that if an appeal is not disposed of within the aforesaid period of 5 years, for no fault of the convicts, such convicts may be released on bail on such conditions as may be deemed fit and proper by the Court.